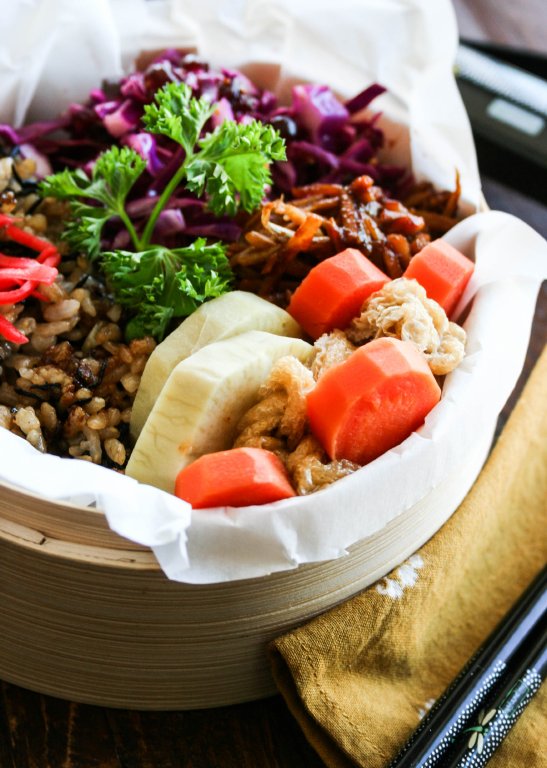 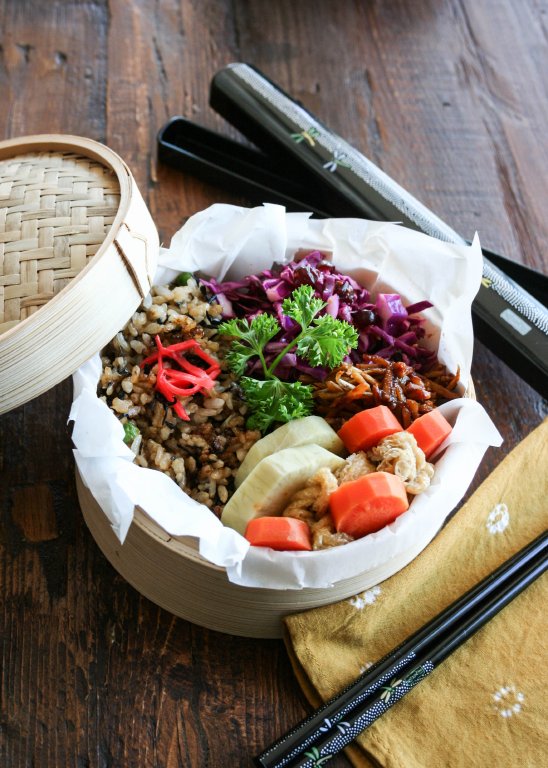 One of the best things about bento box is that you get to eat various different dishes in one meal.

You’re not just eating a burger or a sandwich, but you are eating four to five different dishes.

It’s like a course meal but in one box!

Yes, in order to make it, it does take some planning, but I enjoy the process.

1) Color. You don’t want all the dishes in the same color. Each dish does not have to be a different color from one another, but how it looks matters.

2) Texture. Again you don’t want the same textured food. Something soft, something crunchy, and something crispy… Variety is always good. 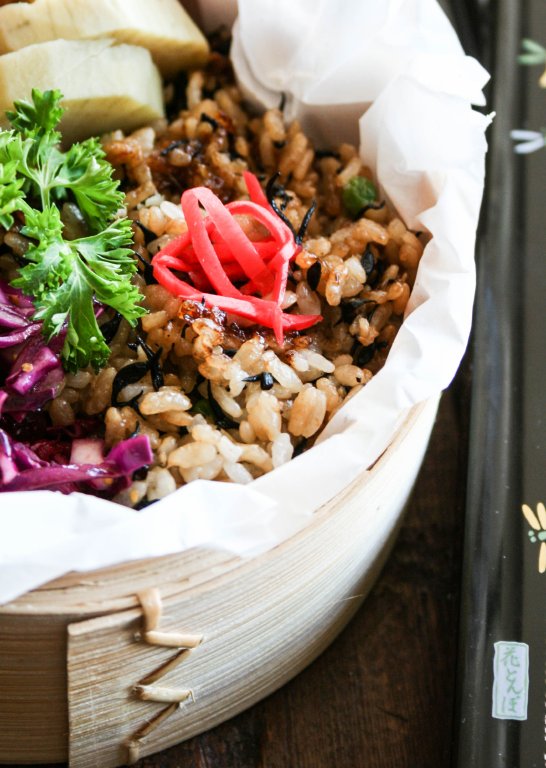 Terry does not care much for plain white rice, and I’ve seen him pour some kind of sauce (usually soy sauce or teriyaki sauce) over his rice. (And he is not the only one, I’ve had several friends, mostly male, who pour soy sauce over white rice.)

So this time I flavored the rice with some sweetened soy sauce while frying the rice.

The hijiki (Japanese seaweed) adds an interesting “ocean” taste to the rice. 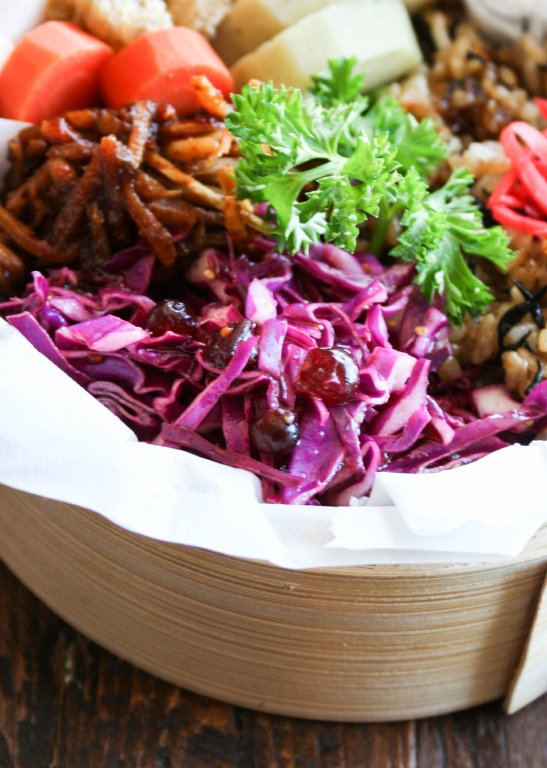 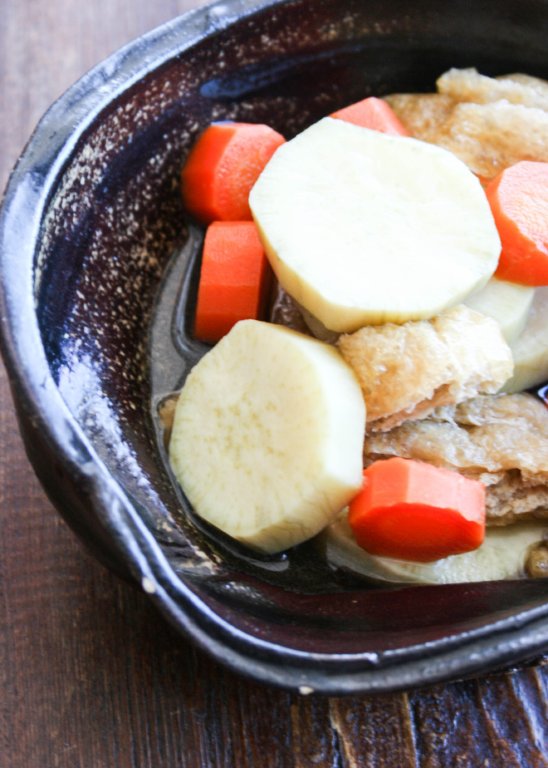 But the main star of this bento was this Japanese sweet potato.

The potatoes were cooked in a Kombu broth along with carrots and A-Ge (fried soy curd).

I consider this a very Japanese dish, set apart from other Asian dishes.

By being cooked in lightly seasoned broth, the true taste of each vegetable comes through and can be enjoyed and appreciated.

1. Put potato, carrot, and A-ge, water, and Kombu in a pot. Boil and then turn down to low heat.
2. Add sugar, soy sauce, and mirin. Continue to cook until the vegetables are cooked through.
3. Add salt. Remove from heat. Let it cool and absorb the flavors. Re-heat before serving. 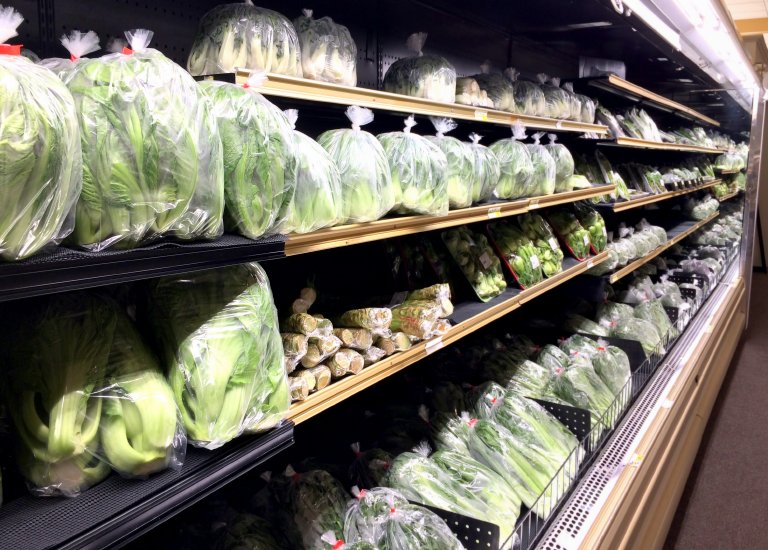 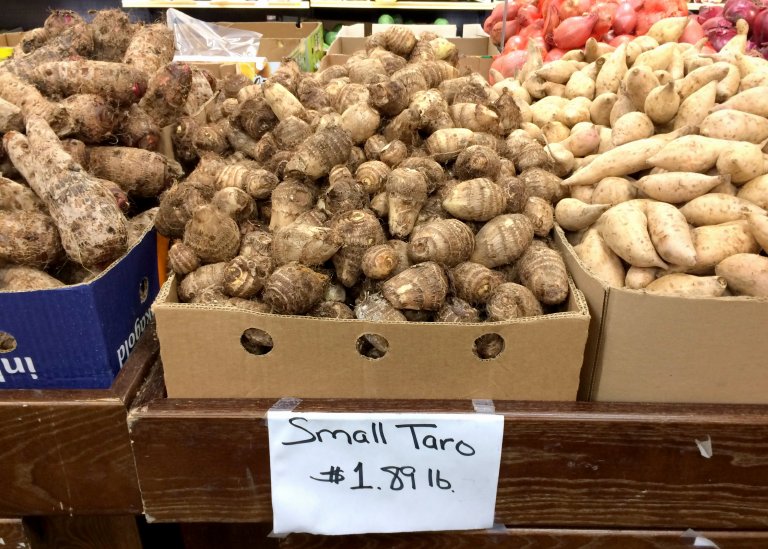 I’ve talked about this new Asian grocery store before, but I had a chance to go back a week ago and I still really like this store.

They have a lot of Asian produce and the price is reasonable.

You can find vegetables, like Japanese (Asian) sweet potatoes and Gobo burdock mentioned above, at this store.

This store is actually not a new store. I should say this is their new location.

Both locations are probably the same distance from my house, but personally I like this location better because of its cleanliness and spaciousness.

This one is away from the hustle and bustle of the inner city, and much easier to get to.

And they have ample parking space, much bigger than the other one.